The league fixtures for the 2017-2018 season popped into my Inbox this afternoon. At first glance, although the total number of teams remains the same as started last season, there is quite a shake-up. The emergence of Strand Chess Club, already strong in both quantity and quality, appears to have been the catalyst for the makeover.

Division One has gained three teams, two from Strand plus Civil Service moving up to play with the big battalions to make a total of eight. Instead of each team playing all its rivals four times, this season it will be a double-rounder only. Total number of matches reduce by two to 14, but in my opinion the benefits of losing an unwieldy bye and a greater variety of competition more than offset that. Of course those who like the league season to go on forever will be disappointed.

Instead of two further divisions, as was the case last season, there will be a large second division of eleven teams that will be organised in 2 phases. Divison 2 will start with an all-play-all with teams playing each other only once. Then there will a separation into two merit-based sections and it looks like this will require a longer league season than in Division 1 - better news here for the maximilists. My understanding is that the precise organisation of Division 2 after the "separation" will be clarified at a later date.

Presumably the Belfast South Division 1 and 2 teams will continue to play respectively under the monikers "The A-Team" and Kelly's Heroes". No word on whether the newcomer, Strand CC, has any colourful names planned for its quartet.
Posted by David McAlister at 5:14 pm 1 comment:

The Time Traveller article for August 2017

Much of the Time Traveller material from the old Ulster Chess Chronicle is now incorporated into the Chronology pages. However, there are still occasions when free-standing Time Traveller articles will appear. As the football season is now upon us, it seems like a good time to present an article on the chess playing Ulsterman who invented the penalty kick.

Here's the link: The goalkeeper who invented the penalty kick
Posted by David McAlister at 4:18 pm No comments:

Stephen Rush games from Rounds 2 to 5

Stephen Rush at the British Championship 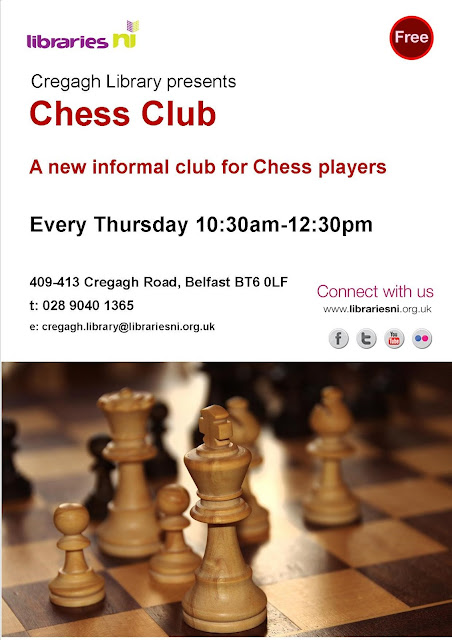 Posted by David McAlister at 7:20 pm No comments:

The Nemtzov Cup was opened wide open on Sunday morning when leader Gareth Annesley lost with the white pieces to Modestas Razbadauskas. A further player withdrawal left an uneven number of players going into Round 5 but Mark Newman stepped into the breach to avoid a bye in the final two rounds.

Nemtzov Cup Final Crosstable
In the Henderson Cup overnight leader Pat McKillen added a further 2.5 points to his total on Day 2. This was more than enough for him to take his fourth Henderson title, equalling the record of Karina Kruk who won four in a row betwenn 2010 and 2013. William Storey, the 2009 Champion, finished second while there were grading prizes for veteran Geoff Hindley and two newcomers to Ulster chess this year - Vincent O'Brien and Louie McConkey.
Henderson Cup Final Crosstable
My thanks to Brendan Jamison for keeping me updated on the progress of the tournament and for providing the photographs that accompanied my text.

Final standings, full details of prizewinners and photographs of the two Champions with their trophies can be found in the Results and Reports Section.
Posted by David McAlister at 10:23 am No comments:

The provisional starting list published in my previous post saw some changes come Saturday morning. Overall there were five "withdrawals" but also one addition with Richard Morrow entering the fray in the Nemtzov Cup. Richard started very well overcoming a 300 point deficit to defeat Danny Roberts and later in Round 3 he held second seed Damian Marchlewicz to a draw.

After Day 1 in the Nemtzov, Gareth Annesley (winner of this event in 2011) leads with a 100% score after defeating Ulster Champion Stephen Rush in Round 3 and is already at least a full point ahead of his rivals.

Nemtzov Cup Crosstable after Day 1
The draw for Round 4 showed some absentees and it looks like the two Marchlewicz brothers have withdrawn from the tournament.

In the Henderson Cup the lower ranked players faced opponents 300-400 rating points above them. They performed well above expectations in four of the seven games with Geoff Hindley and Nived Binu Daniel taking the full point while Tyrone Winter and Vincent O'Brien secured draws.

In Round 2 the surprises continued with Geoff Hindley holding 2009 Champion William Storey to a draw. Even bigger news was that 1060-rated Tyrone Winter beat top seed John McKenna.

The results in Round 3 were along more predictable lines and at the end of Day 1 three-time winner Pat McKillen was leading on three points with Storey just a half-point behind.

In the margins of the tournament, there was some significant news about the Chess NI organised summer trip to Saint Petersburg. Here's Chess NI's Brendan Jamison on the latest development:

We offer our sincere thanks to Daniel Roberts and Joanne Ritchie from Language Training Solutions who share our passion for the educational merits of a cross-cultural chess match in Saint Petersburg, interweaving the role of play and creativity with learning new language skills and improving communication techniques. When chess players from around the world move to Northern Ireland and have little grasp of the English language, many begin their integration process by joining our local chess community. We get extremely excited by players from overseas who join us at Belfast tournaments as they greatly enrich the cultural life of the city. In recent years, we have welcomed players from China, India, Egypt, Russia, Kazakhstan, Poland, Lithuania, Hungary and The Phillipines. Hopefully this trend will continue and expand over the next decade as Belfast enjoys a rebirth as a vibrant cosmopolitan city."

Posted by David McAlister at 10:55 am No comments:

The City of Belfast Championships started this morning and will conclude on Sunday evening after 6 rounds have been played. After the deadline for receipt of entries passed, Brendan Jamison, one of the controlling team, sent me the list of players .

Nemtzov Cup
Henderson Cup
It looks like there are going to be two very competitive sections with the traditional separation point of 1600 being used. However two players have opted and/or been allowed to move up to the Nemtzov Cup. It will be interesting to see how they will do because both teenager Daniil Zelenchuk and Modestas Razbadauskas have been in excellent form recently. The top seeded Marchlewicz brothers from Poland, who I think reside in Derry, previously competed in the Ulster Blitz Championship in December 2015 but this is their first time competing in Belfast in a standard time tournament. Overall the Nemtzov has a fresh look about it with the experienced Danny Roberts, new to Belfast chess events this year, plus two visitors from Drogheda CC - Pat Coleman and Dayna Ferguson (2nd in last years Henderson) - also competing.

In the Henderson top seed John McKenna will be aiming to retain his title. Three other former winners, Pat McKillen (2006. 2014, 2015), William Storey (2009) and Martin Kelly (2011) will be among those trying to stop McKenna scoring a brace.
Posted by David McAlister at 12:07 pm No comments:

Brendan Jamison last night ran the fourth fundraiser - the Belfast Rapidplay Championships - for the trip to Saint Petersburg that he is arranging with Mikhail Pavlov. The idea of a rapidplay on a Friday night is one that has intrigued me but I was never brave enough to organise one. However Brendan took the plunge and was rewarded with a great turnout of 36 players in total, competing across three graded sections.
Unfortunately I had to abandon my own intention to take part, after injuring my right leg while out hiking. However Brendan has very kindly sent me a mass of information on the event. As Brendan is planning a full report on his brainchild at his Chess NI website, I won't pre-empt his commentary. For now I can reveal that the three winners on the night were Modestas Razbadauskas (Senior champion), Tyrone Winter (Intermediate) and Paul Devlin (Junior).
I will come back in the days ahead to this excellent new event. The four Jamison fundraisers have featured innovative ideas and Brendan has found a very suitable playing venue in the Good Shepherd Centre Conference Room. The good news is that while the fundraisers are now over, Brendan intends to continue his organisational efforts next season.

Posted by David McAlister at 10:02 am No comments:

Chess on the Radio

Update and correction:
Apologies - I got my Fridays mixed up. The interview will actually be broadcast tomorrow (Good Friday) at 8.15 am and again between 1pm and 3pm on R. Fáilte 107.1 FM.

Cathal Murphy is being interviewed tomorrow (Friday 7th 14th April) on Raidió Fáilte talking about the Ulster chess scene and beyond. The interview will probably be broadcast between 1pm and 3pm at 107.1FM and should also be available online on the station's website. So if you're a gaeilgeoir, could be well worth checking out.
Posted by David McAlister at 9:59 pm No comments: